Meet your driver at the established place. We will head south to reach Siracusa, whose millennial history makes it one of the largest and most important cities of the classical era. Siracusa was founded by the Corinthians around 734 b.C. and became the first rival of Athens, which tried repeatedly but always failed to conquer it. During the Roman domination, which began in 212 b.C, Cicero described Siracusa as “the largest and most beautiful Greek city”.

In 1693, a violent earthquake destroyed most of the city as well as other towns in the Val di Noto; the old town of Siracusa was rebuilt in a typically Baroque style that still dominates the urban layout. With its many historical, architectural and landscape jewels, Siracusa was listed as UNESCO Heritage site in 2005. 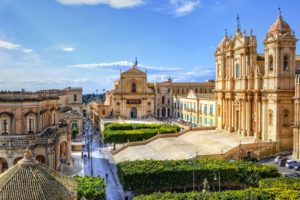 Your Syracuse tour begins with a visit of the Neapolis archaeological park, one of the largest and most representative in the Mediterranean area. It hosts plenty of findings and well-preserved sights, like the Ear of Dionysus, the Roman Amphitheatre and the Greek Theatre. Every year in June, the Greek Theatre turns into a top-selling destination because of the Greek tragedies that are still staged. You can have lunch before proceeding to the enchanting small island of Ortygia, where stands, solemn and imposing, the Baroque cathedral dedicated to the Nativity of the Virgin. The Cathedral is built on the remains of the main Doric temple gracing the polis of “Syrakousai” and dedicated to Athena. Many of the columns are indeed still visible inside the cathedral. Take a walk through the narrow streets of the old town until you get to the Arethusa fountain, one of the rare places where papyrus grows spontaneously, next to a balcony overlooking a breathtaking landscape. At the end of the Syracuse Tour day , be ready to breathe in all the romance of the place upon one of the more touching sunsets you can enjoy in Sicily. You can choose to extend your tour with a visit of the city of Noto, known as the capital of Baroque in Sicily and whose old town, with its Cathedral, was listed as UNESCO Heritage Site in 2002. Syracuse Tour