Meet your driver at the established place. We will drive along the southeastern coast of Sicily toward the city of Catania, where you will visit the typical, picturesque fish and produce market.

Take a walk in the charming Baroque old town of Catania and marvel at the majestic Cathedral dedicated to Saint Agatha, facing the square with the fountain of the elephant (called by the locals “u Liotru”), the symbol of the town since as early as 1239.

An old legend has it that an elephant chased away herds of wild beasts during the foundation of Catania.

The residents still believe that the statue of the elephant has the power to protect the city by keeping the threats of Etna eruptions at bay.

The main street of Catania, via Etnea, is the best place to do some good shopping, with plenty of shops interspersed with Baroque buildings and monuments. Before we leave the city, we will drive by the imposing Monastery of San Nicolò l’Arena, ranking second in extension among the Benedictine monasteries of Europe (after the Convent of Mafra, in Portugal).

On 15th August, a royal decree declared this monastery part of Italian national heritage. In 2002, the monument was listed as UNESCO Heritage Site, considered a jewel of Sicilian late Baroque.

Today, this prestigious building belongs the University of Catania and hosts the School of Humanities. Next is a view of the Castello Ursino, built in the 13th century at the behest of Frederick II.

The castle rose to fame during the rebellion known as “Vespri siciliani” (Sicilian Vespers), for being the seat of the Parliament and, later on, the residence of the Aragonese sovereigns, among whom was Frederick III. Today, it is the Civic Museum of Catania, displaying the Biscari and Benedettini collections plus numerous international exhibitions. 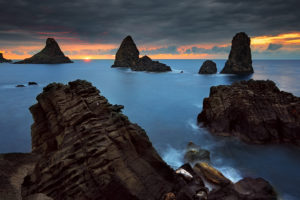 We leave Catania and follow the coastline, driving by imposing lava rocks and toward the seaside villages of Aci Castello and Aci Trezza, the latter a popular place for literature lovers, narrated in Giovanni Verga’s “I Malavoglia”.

Legend has it that the “Faraglioni dei Ciclopi”, the eight basalt rocks standing before your eyes, are the rocks that Polyphemus tossed against Ulysses during Ulysses’ flight.

At a short distance from the coast is the Isola Lachea, which might correspond to the “Goat Island” described by Homer and is currently a center for biological research belonging to the University of Catania.

The entire area has been declared a marine reserve in 2004, and it is the ideal place to taste the worldwide-known fish-based dishes of Sicilian tradition.