Meet your driver at the established place. We will head to the southeastern part of Sicily to visit some of the towns that represent late-Baroque architecture at its best (Ragusa Ibla, Modica and Noto).

They are all located in the area known as Val di Noto, which was listed as UNESCO Heritage Site in 2002. The Val di Noto was an administrative district in charge of judicial, heritage, treasury and occasionally military affairs of the Kingdom of Sicily from the Norman era to its abolition, in 1812.

The area also includes the Iblei and Erei mountains. The geographical complexity of the area lies in its many torrents and canyons. Along the northern border of the Valley run the boundaries of the Eurasian and African plates, which caused one of the most devastating earthquakes ever documented, occurred between 9th and 11th January 1693. 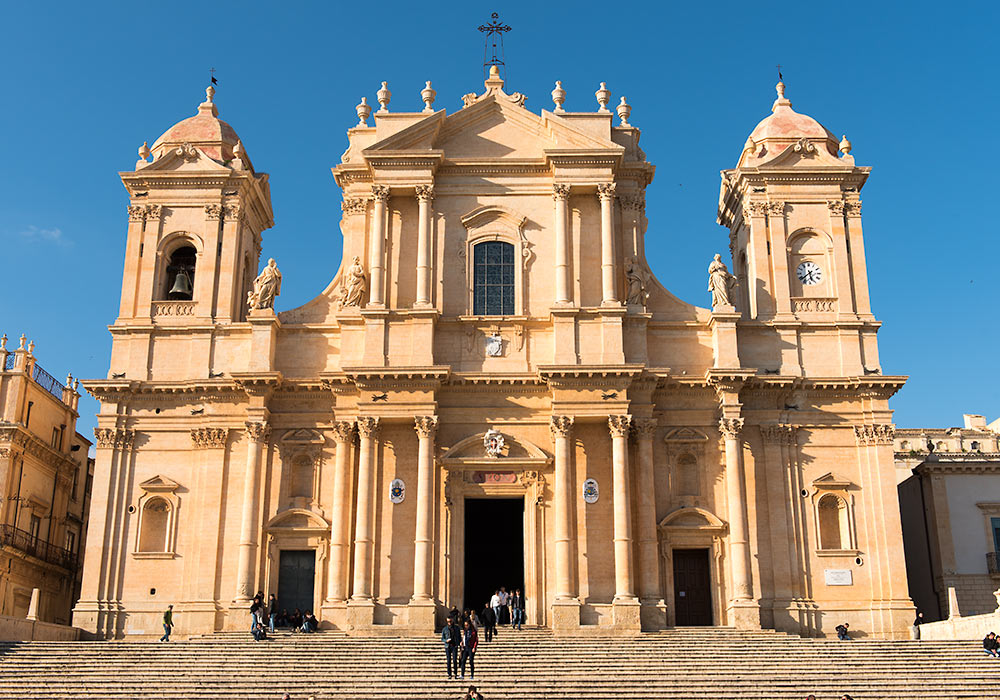 It was certainly the worst catastrophe recorded in Italy, with a 7.4 MMS. The event provoked the total destruction of over 45 between towns and villages, and a total of roughly 60,000 casualties, not to mention the incalculable loss in terms of architectural heritage between churches, monasteries, castles and all sorts of buildings.

And yet, many of those towns rose out of their ashes like a phoenix, shaped around a new style that became known as “Sicilian Late-Baroque”, breathing new life into the economic and cultural growth of the area. The best of Sicilian Baroque can still be seen in some of Noto’s palaces like Palazzo Ducezio (today the Town Hall) or Palazzo Nicolaci, or religious monuments like the Basilica di San Nicolò and the Chiesa del Santissimo Crocifisso. The same applies to some buildings located in the near Ragusa Ibla like the Duomo di San Pietro, or in Modica, with its huge Duomo di San Giorgio.

Enjoy some free time to stroll along the narrow streets of the old town, maybe stopping for an ice cream, for some almond milk or a glass of wine. If you are a foodie and like gourmet restaurants, do not forget to have your table reserved at one of the two Michelin-starred restaurants in Ibla. On the same note, remember that in Modica you can taste a local speciality, the Cioccolato di Modica (chocolate of Modica), made according to an Aztecan recipe and available in a wide array of flavors.